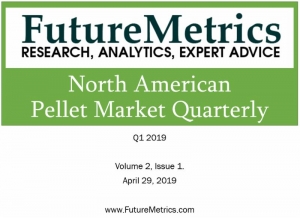 2018 was an improved year for North American pellet producers in both the domestic and export markets, according to FutureMetrics latest issue of the Pellet Market Quarterly.

U.S. and Canadian exports hit record highs in 2018, bolstered by continued demand growth in Asia and a greatly improved market in Europe. On the domestic front production in the EIA North region (Northeast and North Central) recovered to 1.0 million tonnes from just 790,000 tonnes in 2017. In the West, production dipped slightly, from 404,000 to 395,000 tonnes. The South region, which includes both domestic and export producers, produced 6.8 million tonnes, up from 5.8 million tonnes in 2017.

The global pellet market was extremely tight in 2018 as industrial demand outstripped the ability of existing capacity to supply the market for the first time in several years. The top six pellet importers (the UK, Denmark, South Korea, Italy, Belgium, and the Netherlands) increased their import volume in 2018, all but Belgium by 15 per cent or more. This tightness in the market was reflected in spot market price, which, as indicated by Argus Biomass Markets, reached record highs in 2018.

The domestic market was less outstanding, but still a welcome relief from several challenging seasons. It was a relatively normal winter, in terms of heating degree days, and competitive fuel prices were elevated, but not exceptionally so. The biggest story in the domestic market was the clearing of a glut of inventory that had built up over several weaker heating seasons. At the end of 2018, inventory levels in the North were at their lowest point since the EIA started collecting data in 2015.

To learn more go to FutureMetrics.ca.