April 26, 2019 - Advanced Biofuels Canada (ABFC) announced the release of the Biofuels in Canada (BIC) 2019 report, which updates and expands upon previous reports by Navius Research. 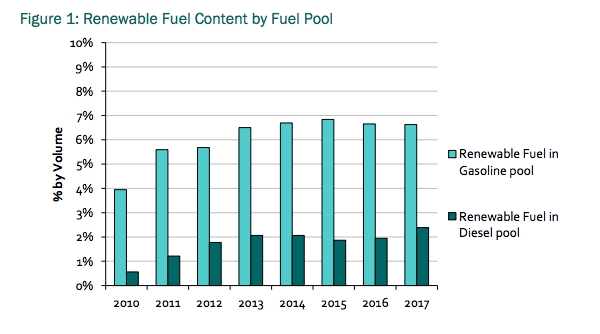 “Canadian federal and provincial regulatory work to reduce transportation carbon emissions relies more than ever on robust, comprehensive biofuel data and analyses. This report, now in its fourth edition, has become an indispensable aid to the market and for policy makers. The results inform key climate action options, as Canada moves to pursue even deeper greenhouse gas (GHG) reductions in the decade ahead,” said Ian Thomson, president of ABFC.

“While use of biofuels has been relatively stable between 2013-2017, improvements in the lifecycle carbon intensity of biofuels have delivered record greenhouse gas emission reductions, with no material change to consumer fuel prices. The Navius analysis supports federal and provincial efforts to regulate GHG emissions in transport fuels and, based on observed prices, demonstrates that market-based measures such as BC’s LCFS can cost-effectively lead the transition to cleaner fuels. Increased use of clean fuels in Canada is key to meeting our Paris Agreement commitments – and advanced biofuels production will support our farming, forestry, and rural communities. As the world shifts to lower carbon sustainable fuels, Canada is well positioned to expand production of clean renewable fuels.”

Amongst the study’s highlights:

Data in the report that assess the British Columbia LCFS show that market-based mechanisms also drive innovation in biofuels. In the 2010-2017 period, biofuel producers reduced the carbon intensity of ethanol used in BC by 41 per cent, biodiesel by 51 per cent, and HDRD by 58 per cent. These innovations are consistent with the emergence in BC of a visible and functioning compliance credit market, which has contributed also to the cost effectiveness of the overall regulation.

New analyses in the report also highlight the disproportionate tax burden on biofuels, when compared to petroleum fuels (gasoline, diesel) or other clean fuels. Volumetric fuel taxes (e.g., excise, carbon) on biofuels have increased fuel costs for consumers and created windfall tax revenues for governments of over $1.5 billion since 2010. “Governments’ policies to reduce fossil fuel use are increasingly being undermined by an antiquated fuel tax design structure in Canada,” said Thomson. “Aligning fuel taxation policies with climate goals is long overdue. Non-fossil content in fuels is only going to increase. The 2019 report makes the impact of these perverse costs, and the need for reform, even more clear.”

The full report and data tables are available at: www.naviusresearch.com/publications/2019-biofuels-in-canada/

Related
Opinion: A clean fuel standard for Canada
A look at biomass financing challenges and successes