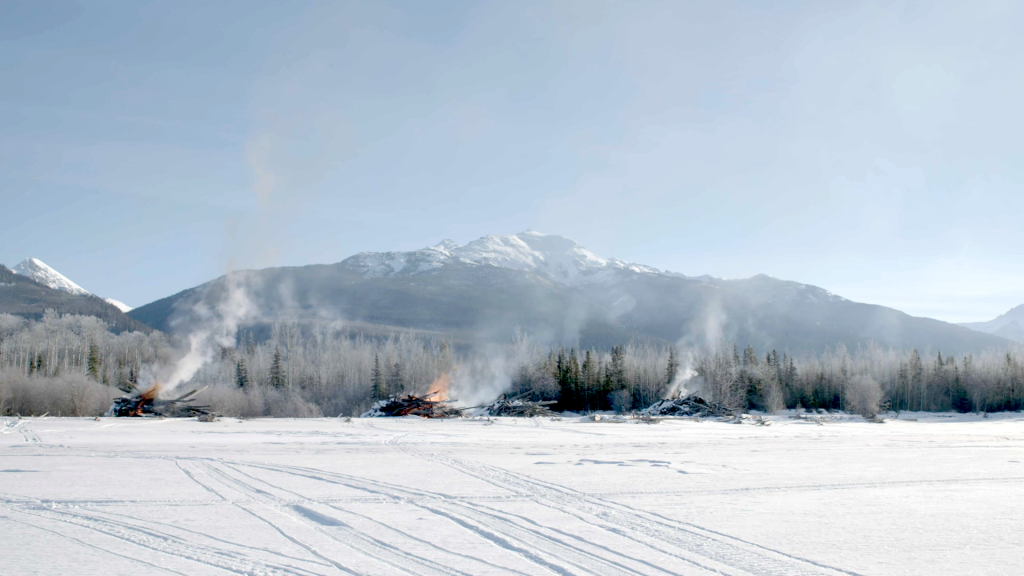 Each year, 100,000 cubic metres of dam reservoir log debris is collected and burned in massive piles just outside of the Tsay Keh Dene Nation village in Northern B.C. The nation wants to use that debris to heat and power its community. Photo by Corner Wave Media.

Tsay Keh Dene Nation has embarked on a bioheat project that aims to liberate its primary village located along the shores of the Williston Reservoir in northern B.C. from reliance on diesel generators. With support from Chu Cho Environmental – an environmental consulting company owned by Tsay Keh Dene Nation – the project aims to completely displace diesel consumption in the community.

The project will see sustainably harvested wood sourced from nearby forestry debris fuel a co-generation ORC biomass plant, creating an inexpensive heat and power source as well as permanent local jobs in the village of around 300 people.

The bioheat project is the second in Canada to be funded by Natural Resources Canada’s Clean Energy for Rural and Remote Communities (CERRC) program. The program’s goal is to reduce remote communities’ reliance on fossil fuels for heat and power. It would be the first system and project of its kind in B.C.

The project is just as much about community autonomy and self-determination as it is about practicality. Forestry biomass is plentiful in the Tsay Keh Dene territory, so much so that it is burned as waste, yet the village has been saddled with a fossil fuel for decades.

The community’s current four diesel generators run by provincial utility B.C. Hydro burn more than a million litres of diesel every year, shipped to the remote community via transport truck.

The Tsay Keh Dene Nation has a complicated history with B.C. Hydro, to say the least. In an op-ed that ran in the Vancouver Sun in 2016, former Tsay Keh Dene Chief Dennis Izony and UBC professor Hadi Dowlatabadi explained the saga and decried the power imbalance between the small First Nation and the provincial utility.

More than 50 years ago the province built the massive W.A.C. Bennett hydroelectric dam near Hudson’s Hope in northern B.C. The dam flooded a forested valley in the traditional territory of the Tsay Keh Dene, removing the First Nation’s rights and title to that land.

In 2007, Tsay Keh Dene first proposed a bioheat project that would allow them to harvest and burn reservoir debris – logs that float to the surface in the dam reservoir. Project supporters at the time emphasised the same benefits touted today: energy independence, inexpensive and climate-friendly fuel, and local jobs. The proposal even won a $1-million award as part of B.C.’s Innovative Clean Energy competition.

BC Hydro blocked the project, instead forcing the community to build new, $3-million diesel generators funded by Indigenous and Northern Affairs Canada, Izony and Dowlatabadi state. In 2016, when the op-ed was written, those 990-kW capacity generators were already not meeting demand, causing blackouts during peak hours.

“Inadequate consultation and disrespect for First Nations was not excusable half a century ago; it should be criminal now,” the op-ed reads.

“Tsay Keh Dene’s project is about fundamentally shifting the energy landscape of a remote community that is currently reliant on diesel through intensive community driven effort that is focused on achieving the vision of a sustainable and prosperous future. A vision that is focused on preserving the natural environment and building capacity, pride, and resilience,” he says.

Tilson says the project is an early step in a long path towards self-determination, reconciliation and building Tsay Keh Dene’s own unique version of prosperity.

“This project will be a powerful centrepiece for a remote community that will endure for decades. Tsay Keh Dene views the development of green infrastructure and clean energy projects as an opportunity to participate in the energy cycle of the natural environment,” he says.

In 2017 Tsay Keh Dene Nation leadership asked Chu Cho Environmental to reinvestigate the idea of installing a biomass system in the community and to begin taking concrete steps towards making it a reality.

“Particularly in First Nations communities, what ends up happening in the community is decided by a bureaucrat in Ottawa. And it’s typically the lowest-cost, minimally viable project,” Hoy says. “As a result, the communities are constantly plagued with these assets that don’t operate properly, that weren’t necessarily commissioned or meet the spec, and they become a burden.”

In contrast, Clean Energy Consulting’s mission was to first determine the community’s capacity – including existing infrastructure and skilled labour. They also defined what could realistically be achieved in terms of infrastructure upgrades and staff training. 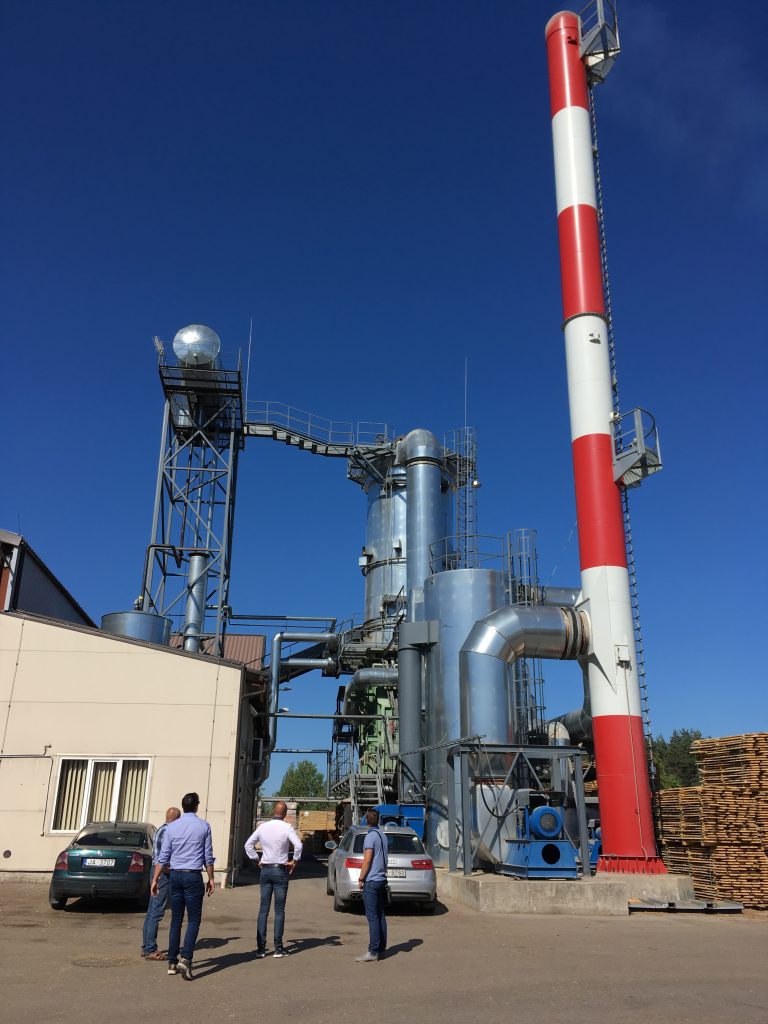 A final piece of the puzzle was to factor in the community’s desire for growth and development. While the costs of operating diesel and biomass systems are roughly equivalent today, unlike a diesel system where fuel costs account for roughly 50 per cent, a biomass plant’s fuel costs are closer to 10 per cent and that money stays in the community, Hoy explains.

“The cost of energy, if you look at it over 20 years, ends up being quite flat and not that dependant on the amount of production,” he says. “If we make twice as much energy it only costs you a fraction more. So that really creates the capacity in a community for an energy system that, once it is built – and we’re calling it foundational infrastructure – now, if the nation wants to build a swimming pool or a rec centre or a pellet plant or sawmill, the costs of producing enough energy to operate those assets is negligible.”

A spinoff but essential benefit of a biomass plant is the creation of jobs in the community to both build the infrastructure and service the equipment, as well as permanent harvesting jobs to collect and process the reservoir log debris.

Currently, that debris – some 100,000 cubic metres of wood each year – is collected and burned in massive piles in order for BC Hydro to maintain navigable waters in the reservoir. Tilson says it’s a logical step for the Tsay Keh Dene to harvest that fuel for its power and heat.

“Tsay Keh Dene territory is vast, it’s full of immense forest reserves, it’s been heavily harvested and all those residuals are burned every year. There are tens of thousands of cubic metres in any given month available for an energy system. It just makes sense to close the loop on an economy where you are wasting resources,” he says. 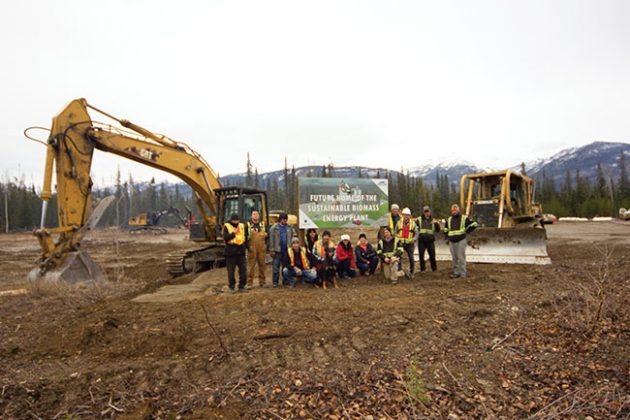 Tsay Keh Dene Nation recently held an engagement event in the community to begin cleaning up the site where the biomass plant will be built. Photo by Chu Cho Environmental.

Once the community-needs picture was complete, the team landed on plans for a modern combined heat and power (CHP) biomass ORC (organic Rankine cycle) dual-combustor system, likely around 1.2 MW.

The dual combustors will be burning the biomass to create electricity and heat, while the ORC converts heated thermal oil into electricity.

“The ORC system is very reliable and needs very little maintenance. These systems have run for 10 years or more without being taken down or having anything done to them. And there are about 400 of them running in Europe,” Hoy says.

The combustors, which are relatively low tech, also allow for a more flexible fuel specification when compared to, for example, a wood gasification system. This is important since Tsay Keh Dene will be sourcing fuel from low-quality reservoir debris as well as harvest residuals from local forest licensees.

“If you throw rocks in there, you don’t want to be doing that, but the system will tolerate it,” Hoy says.

Having two combustors allows the community to control the heat output, turning one off when it’s not needed during the summer months, or when it’s time for regular servicing.

The electricity produced from the biomass plant will then flow into a roughly 2 MWh battery system. The battery allows for system downtime, and also supplies extra energy to the system during peak demand when the biomass system can’t produce heat fast enough to meet needs. A 1.2-MW ORC system along with a battery will be enough energy to serve the 300-person village, as well as foreseeable growth for the next 10-15 years.

The primary selected vendors for the project are CAW (Classen Apparatebau Wiesloch GmbH) for the thermal oil plant and Turboden for the ORC turbine generator.

With CERRC funding in hand and a solid system design from Clean Energy Consulting, the project team is working through final engineering requirements and commercial agreements. Construction is slated to begin in late 2020 or early 2021. The system is expected to be fully operational in 2022.

An ongoing challenge has been working with policy makers and the provincial utility to green light a change to a utility system that has been in place for decades.

As with any bureaucratic change, they know it will take time, Tilson says. “It’s a long-term transition to have a community running on a biomass system that is, in and of itself, sustainable,” he says.

But Tsay Keh Dene Nation has been waiting on this energy independence for arguably a half a century. It’s time.