March 25, 2015 - The production of biofuel calls for large doses of patience. It can take several years to grow the trees and grasses, known as feedstock, that serve as the raw material for biofuel, and large swaths of land are required to grow these plants at commercially viable levels. 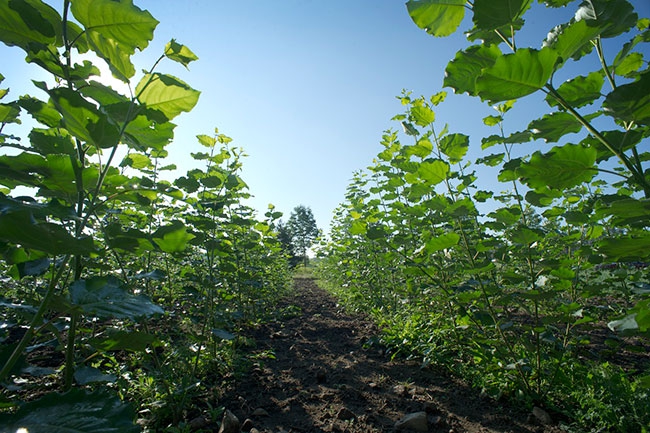 In order to determine if poplar is an option here in Canada The production of biofuel calls for large doses of patience.

Here’s the problem: a large proportion of Canada’s most arable land is set aside for agriculture. Using this land for growing biomass would mean sacrificing food-producing crops, not to mention stirring up the thorny food-versus-fuel debate. In short, it’s a nonstarter. How then to procure the biomass to feed the emerging biofuel industry – efficiently and sustainably?

The recently launched Canada-wide trial of energy crops hopes to answer the question.  Conceived and funded by BioFuelNet, the three-year trial seeks to identify the most propitious combination of feedstock and conversion technologies for the production of liquid biofuel. Partners also include Agriculture and Agri-food Canada and the Canadian Wood Fibre Centre, along with a few private partners.

The research will take place at four sites, strategically chosen to reflect Canada’s different climate and growing conditions: Nappan, N.S.; Guelph, Ont.; Kemptville, Ont.; and Edmonton, Alta. Growing the same species in these four separate regions will help the researchers determine the most – and least – hospitable growing conditions for the plants. The trial’s primary coordinator, Dr. Kevin Vessey of Saint Mary’s University in Halifax, plans to debrief with team members and support staff at least once a month through conference calls.

First challenge: what plants to use? Corn – a ready source of biofuels such as ethanol – has acquired a bit of a bad rap, arguably for good reason: using corn for fuel diverts the crop from its important use as a food source.

“That’s why the new science is focusing on creating liquid fuel from biomass rather than corn,” says Dr. Naresh Thevathasan, research manager at the trial’s Guelph site. “The hard part is figuring out the best feedstock to provide that biomass.”

To this end, the pan-Canadian trial is focusing on two clones of hybrid poplar trees and two varieties of switchgrass – a combination the team hopes will provide the best balance of yield, convenience and flexibility. Poplars can grow fairly quickly, so trees planted today may reach two or three metres in height by the end of 2015, when the researchers plan to harvest the first crop. A bonus: “Once you remove the biomass, new shoots grow from the stump, so you don’t have to replant,” says Dr. Thevathasan. The switchgrass, meanwhile, can be harvested annually. “We’re reducing the risk by having this mixture of biomass sources,” he explains. Not only can they harvest the two plants at different times, but “if a disease strikes the poplars, we can rely on the grass, and vice versa.”

Next challenge: where to grow the stuff. The land they’ve targeted to test their feedstock – categorized as Agricultural Capability Class 3 and 4 land – has lower-grade soil than agricultural land. “It’s ‘marginal land’ that has limitations such as stoniness, not much topsoil, excess water, or sloping,” says Dr. Thevathasan. Not surprisingly, this puts a ceiling on yield.

While fertilizers are an obvious way to boost productivity, they don’t do any favours to the environment. For the time being, the researchers will try to avoid using them, but Dr. Thevathasan concedes they may need to go down that road. Throughout the project, they plan to keep track of how much fertilizer they may need, along with herbicides, insecticides fungicides, and fuel for farming equipment.

The team will also report on details of soil quality, rates of growth, rates of biomass removal, among other parameters. Arguably most important of all, they’ll assess the cost-effectiveness of growing these crops and selling them in the local market. “We’re monitoring a range of inputs at all four test sites, such as labour, fuel, and pest controls,” says Dr. Vessey. “The goal is to conduct a ‘life cycle analysis’ of the production system.”

According to Dr. Thevathasan, many of today’s farmers hesitate to grow biomass to sell to the biofuel industry because they’re not confident they can turn a profit. By the end of the trial, he and his colleagues hope to have answers that can be put to practical use.

Approaching critical mass
Several generations ago, biomass – especially wood – served as the primary source of energy for homes and industries in Canada. Low-cost fossil fuels have reduced the country’s dependence on biomass, such that they only supply about 4.7 per cent of our primary energy needs today.

That said, the industry is poised for a big leap. Canada’s forest industry is already making good use of biomass for the pulp and paper industry’s energy needs. Bioproducts such as bioplastics and glass fibre represent a still greater opportunity for biomass applications. By 2015, analysts expect the global market potential for emerging bioproducts will reach: