BioFlame Briquettes in Chemainus, B.C., produces around 3,500 tonnes per year of briquettes for the residential heat market on Vancouver Island. 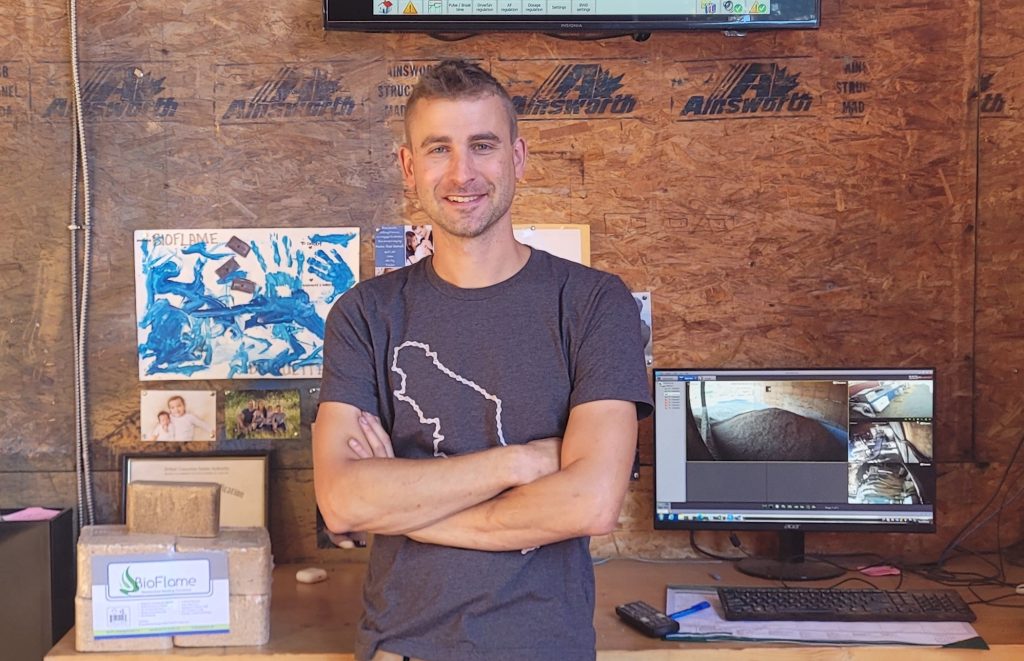 It was more than 10 years ago now that Vancouver Island resident Marcus Woernle was at a wood processing tradeshow in Europe and first saw a biomass briquetting system. Impressed by the ease of the process and sustainability of the product, he took a leap of faith and purchased a system. Thus, BioFlame Briquettes was born in Chemainus, B.C.

Woernle, a power engineer by trade, has for years been tweaking his process, adding in new equipment, and slowly growing the residential biomass briquette heating market on the Island.

“Here, with the Gulf Islands, there’s not very much natural gas, so there is a really big market for firewood – lots of people use it. This is a direct replacement for that,” Woernle says.

This year, BioFlame landed a game-changing supply contract. The Saanich Commonwealth Place – a recreation centre in nearby Saanich, B.C. – is upgrading its existing natural-gas boilers to use biomass and has chosen BioFlame as its feedstock provider. The expansion into the municipal heating world is a big one for the small briquette company, and Woernle hopes it’s the beginning of a new chapter for them. 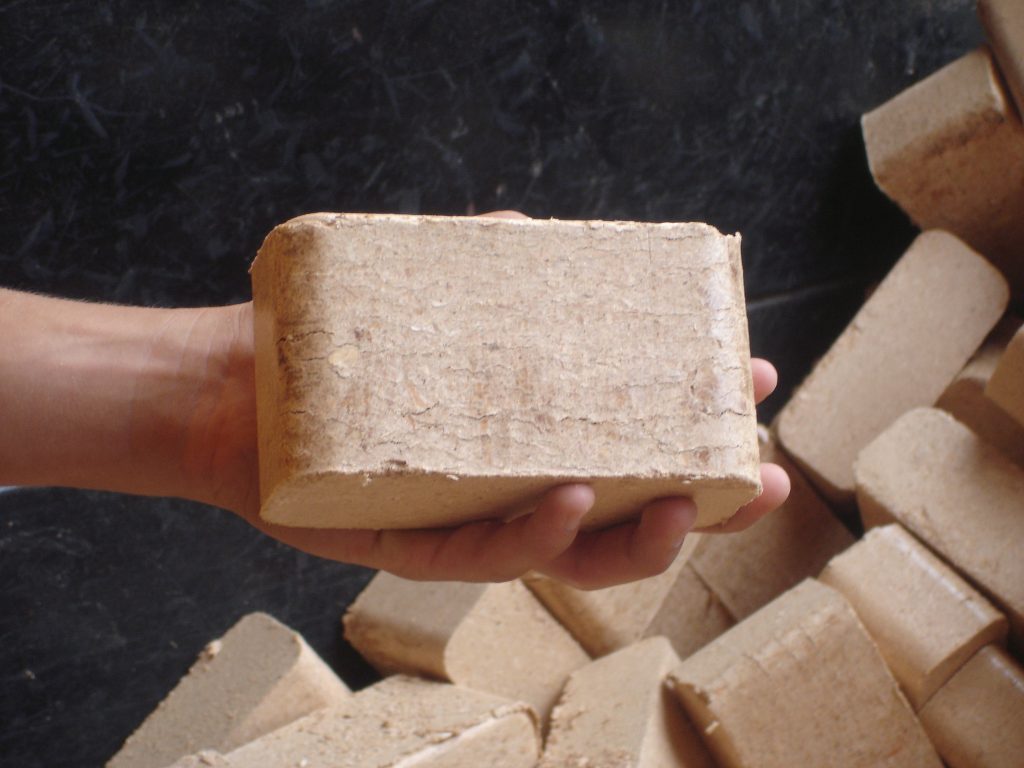 The briquettes are grouped in 12 and wrapped in recyclable plastic. Photo courtesy BioFlame Briquettes.

As the sole owner of his company, Woernle says he chose the briquette route over wood pellets because the small-scale briquette machinery made capital costs within reach. All of his equipment purchases have been from overseas suppliers.

BioFlame’s briquetting process begins with a sawdust delivery by a walking floor truck into storage tents. The large tent buildings on site keep the chip material as dry as possible before processing. A Case front loader then moves that material onto walking floor that feeds into the dryer. A German-designed NEWeco-tec belt dryer, housed in two 40-foot shipping containers, dries the material before it is conveyed to a large silo, ready for the briquetting process.

The four briquetting machines are fully automated RUF Briquetting Systems RB440 hydraulic presses, also out of Germany. Loaded wood material moves by screw conveyor into a pre-charging chamber where it’s pressed into the main pressing chamber. The main pressing ram then compresses material into the mold, forming the rectangular briquette, which is then pushed out of the machine and into an automated packaging machine. Each machine produces about half a tonne an hour.

“They’re very reliable,” Woernle says of the RUF machines. “They run twenty-four-seven. You program how many briquettes you want produced overnight, they run into a bin, and an employee feeds them into the packaging machine in the morning. This is in addition to the briquettes being produced during the working day, that are automatically fed to be packaged.” 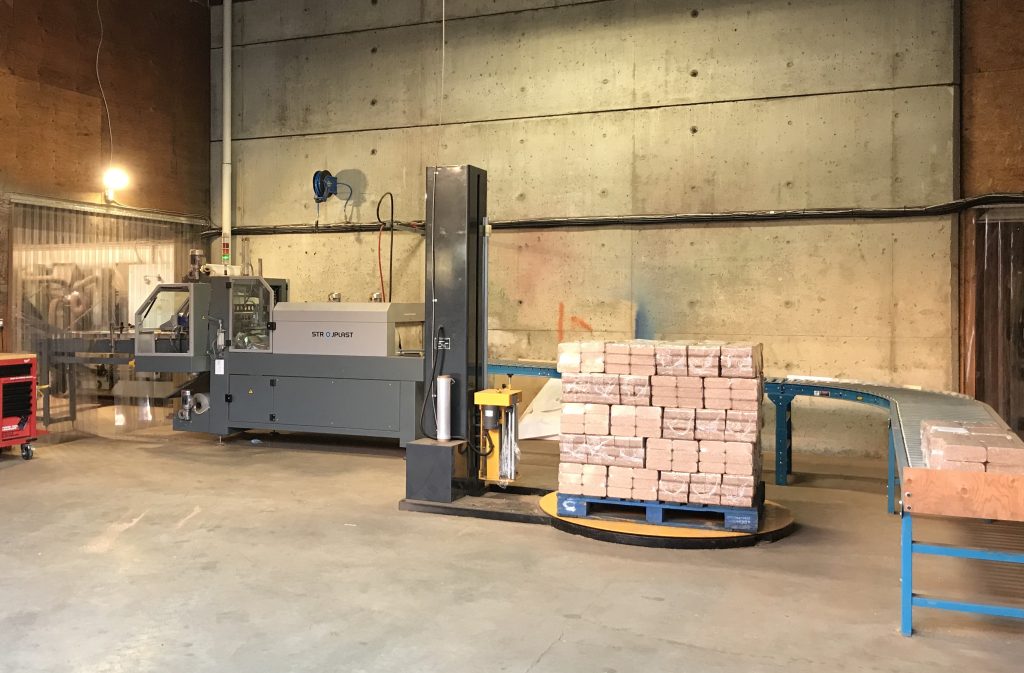 The briquettes are grouped in 12 and wrapped in recyclable plastic by a Strojplast machine out of Slovenia. Those packages are then manually palletized in roughly the equivalent amount to a cord of wood. Bulk bags are also made available to save on packaging.

The dryer was a pivotal equipment purchase three years ago as it allowed them to process wet sawdust, Woernle says. “I oversized the dryer because that’s usually the bottleneck, I find. So, our capacity is 20,000 tonnes. Right now, we’re doing around 3,500 and we will expand from there and see how things go,” Woernle says.

“As big of a lumber industry that we have on the Island, there’s not that much KD [kiln-dried sawdust] – we export a lot of logs, or have green and send it out,” he says.

The limited fibre supply meant his product was selling out by October every year. With the dryer in the mix, they were able to add in more briquette machines, significantly upping production to its current numbers. 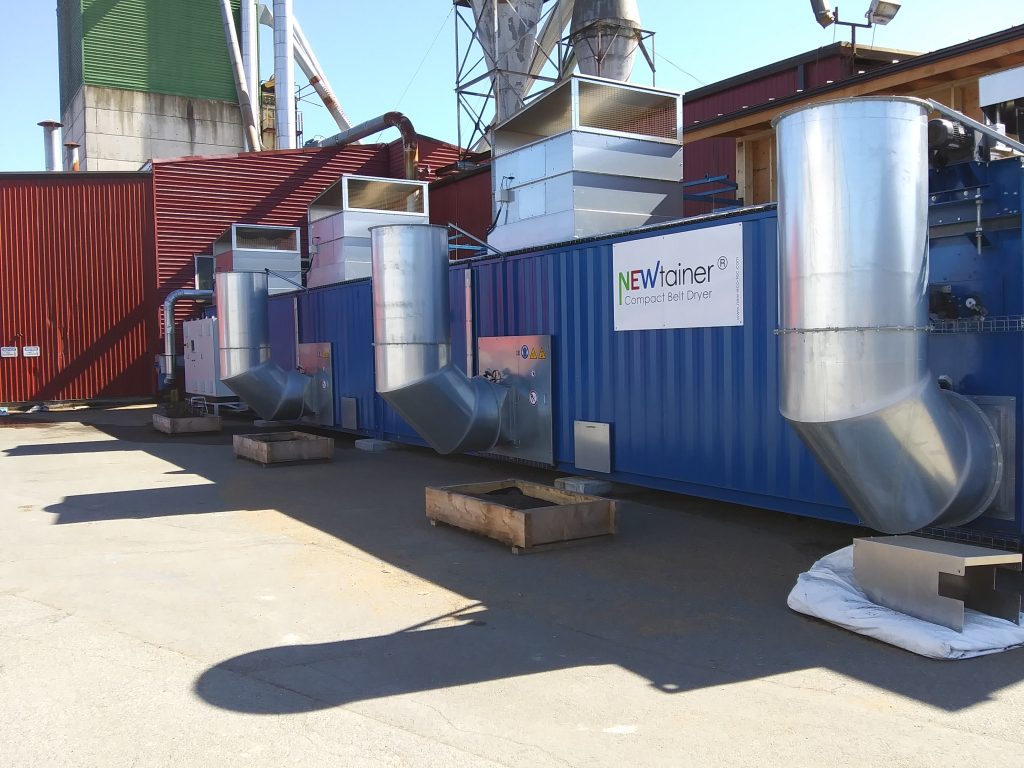 With no hammermill in the manufacturing process at the moment, BioFlame’s feedstock needs to be a reliable size and good quality.

A good portion of his supply currently comes from Long Hoh Enterprises – a 100 percent Douglas fir value-added mill in Qualicum, B.C. Other fibre comes from nearby chipping mills (Harmac Pacific) where chips are screened before processing at pulp mills, as well as a few other small value-added facilities (Canadian Bavarian Millwork).

BioFlame’s biggest fibre supply limitation is related to salt water. Much of the log supply moving around the Island is stored at some point in log sorts in the ocean. The log absorbs salt from the ocean and if burned creates dioxins. Dioxin if not properly mitigated are harmful to the environment and the wood burning stove.

Despite this, fibre supply has not yet been a challenge, Woernle says. “Going forward, there’s lots out there, we just have to get a little creative.”

BioFlame’s supplies about 30 to 40 retailers, all within Vancouver Island and the surrounding Gulf Islands. The largest customers are local grocery and hardware stores. They also work with some distributors that deliver briquettes directly to customers’ homes as an alternative to cord wood.

“That’s really taken off now in the last year. It’s just a lot easier for people – they get it delivered to their door; they know what they’re getting. One pallet is equivalent to a cord of wood, they don’t have to worry about the moisture content, it’s neatly packaged, and easy to handle.”

“I think people do realize that it’s adding value to a resource. I pay for the sawdust so a sawmill can make more money, they can pay more for their logs, etcetera,” Woernle says.

This summer, the District of Saanich in the greater Victoria area shared news of their plan to upgrade the Saanich Commonwealth Place’s natural gas boilers to biomass alternatives. Their goal is to reduce the recreation facility’s greenhouse gas emissions by 90 percent.

The new system is expected to take its first shipment by the end of 2022 and will run off BioFlame’s biomass pucks. 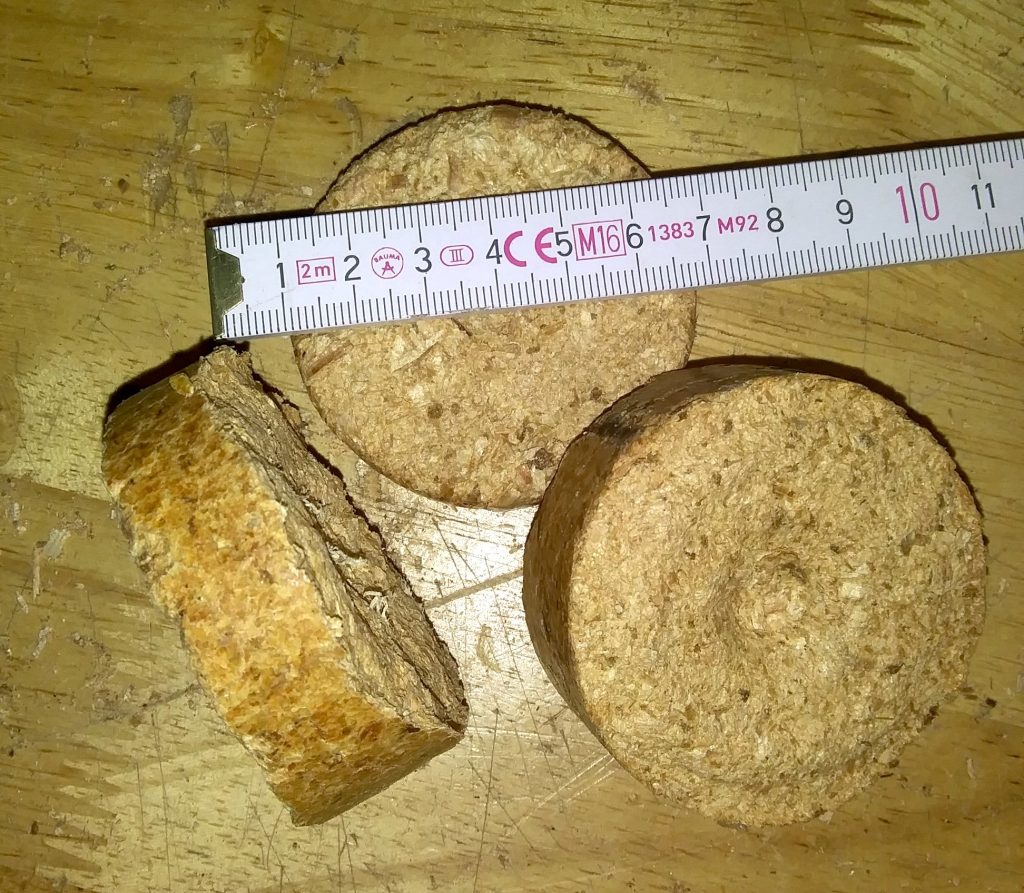 “The district took a tour of my facility. They were wondering what different fuel options are available,” Woernle says. Briquettes are too large for industrial use – they don’t fit into augers that feed most biomass boilers. Wood chips are the ideal size, but they have a low bulk density, which would require a steady stream of trucks feeding the boiler. They settled on biomass pucks as a compromise.

“This way, at the height of use, they’ll need a truck about every 10 days. Way less traffic for them and less maintenance for the boiler – less ash,” Woernle says.

In order to fulfill the contract, BioFlame has purchased a C.F. Nielsen mechanical briquetting machine that can produce both a round log and a small puck. The Saanich facility will require about 1,100 tonnes a year.

“It’s really exciting. They’re a world-class facility and it will be a great show piece for expanding interest,” Woernle says.