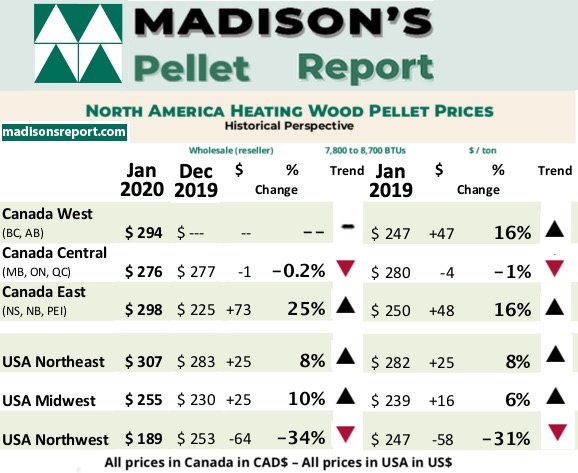 There have been several developments, both industrial and scientific, in the exciting field of generating energy from woody biomass material. Here are a few updates:

According to University of British Columbia Chemical and Biological Engineering Professor Xiaotao (Tony) Bi, wood pellets are the best choice for residential heating. Environmentally speaking, wood pellets are an ideal fuel for industry and district heating.

Waste-wood materials, such as sawdust, are bound into pellets in a high-temperature pelletization process; no additives or glues are used. No new trees are cut down to create pellets, and pelletization is a beneficial use of trees killed by the mountain pine beetle. Engineered pellets have a uniform size and moisture content and can be cleanly burned in specially designed automatic pellet furnaces, unlike wood logs or wood residues in traditional wood furnaces. Wood pellets have been endorsed by the US Environmental Protection Agency and are one of the cleanest-burning and most renewable energy sources on Earth.

Bi, an expert in fluid-particle systems and multiphase reactors, is part of UBC’s Biomass and Bioenergy Research Group (BBRG). Bi conducts life-cycle analyses—evaluations of the environmental and social impacts of a given product or services caused by or required for their existence—to investigate the health and environmental concerns of pellet burning and improve the environmental performance of pellet making, transportation and distribution.

“British Columbia is the centre of wood-pellet production in North America and roughly 90 per cent of B.C.’s wood pellets are exported, including more than 500,000 tonnes to Europe. The B.C. wood pellet industry has grown by +20 per cent each year over the last five years. More than 11,500 biomass (biological matter that can be used as fuel) installations in the European Union have generated over 260 million tons of CO2 credits, valued at over C$5 billion. The EU currently produces four per cent of its electricity from biomass sources and intends to double its output by 2010 through the initiatives outlined in the EU Biomass Action Plan.”

Read more about this here.

Elsewhere, recently Canada released a highly anticipated document outlining the beginnings of a nationwide framework for switching from a volumetric to a carbon intensity approach for renewable fuels. In April 2019, the federal carbon pricing backstop was imposed on those provinces not meeting the minimum threshold. Along with ethanol and biodiesel, wood pellets are included in the report: Canada Biofuels Annual 2019 available here.

Pellet production in Canada has achieved linear growth averaging 12 per cent annual increases from 2013 through 2018 and forecasts an increase in 2019. Increases in nameplate capacity were also steady over the same period, but have not kept up with demand growth as capacity use rate has risen from 57 per cent to an estimated 67 per cent in 2018 and further increase to 71 per cent in 2019. FAS/Ottawa estimates current capacity at 4.66 MMT; however, some projects are underway and this will likely increase by 2020.

Wood pellet consumption in Canada also shows linear growth averaging 13 per cent average annual increases since 2013. Consumption for 2018 is estimated at 315,000 MT in 2018 rising to 380,000 MT in 2019. The potential for a large future expansion in domestic demand depends on the success of Canada’s goal to phase out coal-fired power plants by 2030 and the cost of alternative renewable energies.