Features Harvesting Pellets Transportation
How to reduce transportation emissions in Canada by 50%: use wood pellets

A strategy that values Canada’s forest and fossil fuel resources 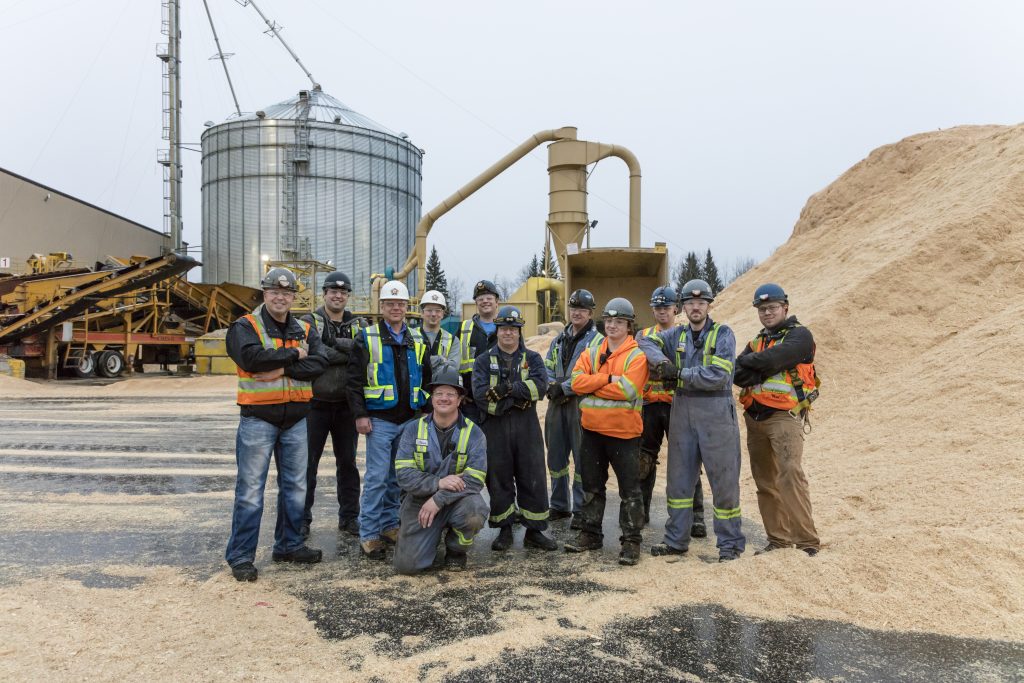 Canadian climate policy has generally ignored the use of forest biomass for heat and co-generated electricity. There appears to be a general consensus amongst policymakers that the primary climate change mitigation role for bioenergy should be conversion of biomass to liquid fuels for applications that are hard to electrify: aviation, long-distance trucking, and marine transportation. This view is misguided for three reasons:

1) Despite decades of effort and billions of dollars of investment, wood-to-liquid transportation fuel technology, whether using thermochemical (gasification, pyrolysis, hydrothermal liquefaction) or biochemical (hydrolysis and fermentation) routes has not yet been commercialized. Even if technologies can be commercialized in the next five to 10 years, it will take decades for large-scale roll-out to achieve the greenhouse gas (GHG) reductions desired.

3) Most importantly, production of liquid fuels from wood is inefficient. For most technologies, the efficiency of conversion is just 28-36 per cent. In comparison, using wood for heat or combined heat and power in modern equipment has an efficiency three times higher, at 85-90 per cent. This higher efficiency directly translates into less fossil fuel consumption and more GHG reductions, even if the fossil fuel being replaced (e.g., natural gas) has a lower carbon intensity than transportation fuels.

Even with these drawbacks, most developed countries are restricted to liquid fuel conversion technologies if they want to address aviation, trucking, and marine emissions using forest biomass. Canada is not. Our country is uniquely positioned to decarbonize transportation using commercial bioenergy technologies in the short-term – but not in the way that we have pursued to date. How then?

By using forest biomass, with wood pellets being the most logistically feasible form at scale, for thermal energy in the recovery and processing of oil sands. And for even greater benefit, capture the thermal GHG emissions with bioenergy carbon capture and storage (BECCS) technology. If this approach was implemented, crude oil from Canada’s oils sands would shift from being one of the highest carbon intensity crudes in the world to a negative emissions crude.

It is impossible to overstate the importance of oil to Canada. It is, by far, Canada’s largest net export, with the oil sands accounting for 98 per cent of national oil reserves. Yet gasoline, diesel, jet fuel, and bunker C produced from oil sands bitumen is higher in life cycle carbon intensity than the same products produced from Brent or other lighter oils. In fact, Canada has the fourth highest crude carbon intensity in the world, behind only Algeria, Venezuela, and Cameroon. The reason for this higher carbon intensity is the vast amount of natural gas and off-gas used to provide thermal energy for oil sands recovery, upgrading, and refining. This is particularly true for oil sands in situ projects, which inject massive volumes of steam (thermal energy) underground so oil can be pumped to the surface. But what if the large amount of energy required for oil sands recovery and processing was flipped from a carbon intensity competitive disadvantage to a competitive advantage by switching from natural gas to wood pellets for thermal energy?

Wood pellets have a life cycle carbon intensity 70-80 per cent lower than natural gas. Less processed wood fuels, such as wood chips, are even lower and provide a 90-95 per cent lifecycle GHG reduction. If all the oil sands recovery and upgrading and 50 per cent of oil refining energy was provided by wood pellets, the carbon intensity of diesel and jet fuel could be reduced by approximately 20 g CO2e/MJ (18-22 per cent). This would make oil sands products amongst the lowest carbon intensity in the world. However, this is just the starting point.

Centralizing biological CO2 emissions at combined heat and power plants permits the development of Bioenergy Carbon Capture and Storage (BECCS) projects that store the CO2 underground, resulting in negative emissions. Applying BECCS to oil sands recovery, upgrading, and refining could reduce the carbon intensity of diesel and jet by an additional 30 g CO2e/MJ, since combustion of wood results in more CO2 per unit energy than natural gas. So, combining fuel switching with BECCS would reduce the lifecycle carbon intensity of diesel and jet by approximately 50 g CO2e or 45-55 per cent.

Avoided emissions of black carbon (soot), a short-lived climate pollutant, could reduce this by an additional 10-20 g CO2e if the wood fuel baseline was uncontrolled burning of slash piles or wildfires. All told, this is a 60-70 g CO2e/MJ reduction from a current performance of 100-110 g CO2e/MJ and results in oil sands-based diesel and jet fuel with a carbon intensity of 40-50 g CO2e/MJ – approximately the same as corn ethanol. This is without changing the vehicle fleet or fueling infrastructure.

Adoption of this approach would give Canada reason to seek ever more stringent GHG performance requirements around the world, thereby working to create a growing market for our low-carbon, premium petroleum products and negative carbon crude. Our current diametrically-opposed approach of seeking others to adopt low carbon fuels while we push high carbon crude makes no sense – and the rest of the world knows it. 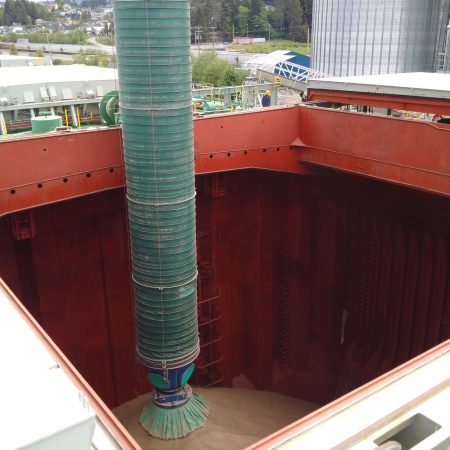 Presently, almost all Canadian-produced wood pellets are exported to Europe and Asia where they are used as a clean, renewable, low-carbon replacement for fossil fuels. We should be doing the same in Canada. Photo credit: Pinnacle Renewable Energy.

Commentators seek to make a case that the oil sands have no place in a decarbonizing world but they have not considered the potential for carbon negative crude and the rapid decarbonization of transportation that could occur by implementing BECCS at a dozen oil sands projects. To us, these seem slightly easier than replacing the entire transportation fleet and fuel distribution system, while simultaneously running hydrogen pipelines across the country. Norway, another developed country reliant upon oil revenues, is planning a large-scale CCS project, with CO2 sourced from biomass-dominated waste combustion to reduce national GHG emissions.

Claims will be made that Canada simply cannot sustainably source sufficient woody biomass. Previous studies have estimated solid biomass feedstock potential to exceed 2 EJ/yr by 2030, while oil and gas extraction and recovery in Alberta consumes approximately 1 EJ/yr. A significant increase in wood fuel consumption in Canada will not result in deforestation due to the country’s leadership in sustainable forest management, which applies regardless of the products.

Regardless, in a changing climate, Canada will be forced to actively manage a much greater proportion of its forests if it is to adapt. This is already being planned in fire-prone California. As an example of what is possible with active management, Sweden harvests ten times the volume of timber per forested acre as Canada, but the net productivity of the forest is much higher – so much higher that net carbon uptake by the forest reduces Sweden’s national GHG emissions by 80 per cent.

Yes, wood pellets are priced higher than natural gas in Alberta. But when GHG reductions in the transportation sector are valued near $300/t CO2e ($18.60/GJ if applied to natural gas used in production), as is the case in California, British Columbia, and potentially in Canada under the forthcoming Clean Fuel Standard, there is a strong economic case to be made for fuel switching and BECCS. It will always be difficult to compete with natural gas in Alberta, but if we have decided to decarbonize, the question becomes one of selecting the lowest cost and most efficient decarbonization approach. For thermal energy, that means biomass.

Canada is already a leader in CCS development, with projects such as Boundary Dam in Saskatchewan, QUEST in Fort Saskatchewan, and the Alberta Carbon Trunk Line. The Western Canadian Sedimentary Basin has an immense CO2 storage capacity and application of CCS to biological CO2 is very similar to fossil fuel-sourced CO2. In fact, Canadian wood pellets are already being used by the Drax power plant in the UK for BECCS trials and Stockholm Exergi, which owns and operates a wood-chip fuelled 400 MW combined heat and power plant in downtown Stockholm, is pursuing a BECCS project to more than offset all transportation-related emissions in the city.

The cellulosic biomass-to-liquid fuels sector is littered with failed companies, massive government grants for unsuccessful technology commercialization, and unrealized but promised GHG reductions. Names like KiOR, Range Fuels, Dynamotive, Choren, Abengoa, Lignol, GoBiGas, and DuPont Danisco Cellulosic Ethanol come to mind. We continue to see good money chasing bad ideas that simply won’t work. We wish it were not so, but the technical and scale-up challenges are immense and it is always important to ask – is this the best use of our wood resource, taken in the context of our national situation? Wood-to-liquid fuels technology could be justified in other jurisdictions, but it is difficult to make this argument in Canada. As always with the bioenergy and bioproducts sector, the question is never one of whether we technically should, but one of whether we economically, environmentally, and socially should. It is important to develop innovative ideas, technologies, and business approaches, but we should not put money into technology commercialization for the sake of technology commercialization.

While we do not agree with the view that bioenergy should focus exclusively on hard-to-electrify applications, a policy prioritization of transportation decarbonization must be considered within the broader context of Canada’s unique natural resources. This means living in reality and seeking the most efficient – both economically and energetically – approaches. For example, using wood for combined heat and power generation, with the electricity used for EVs, is nine times more efficient than producing and using wood-based liquid transportation fuels. There is an opportunity for Canada’s natural resources sectors to work together to be world leaders in low carbon fuels, metals, and minerals. Our country needs to recognize our unique opportunities and challenges in climate action rather than pursue strategies where we have no competitive advantage. Use of sustainable forest resources – and specifically wood pellets – in meeting our immense industrial thermal energy demands should be one of them.

TorchLight Bioresources is a Canadian consulting and project management firm. It has completed over 70 contracts for investors, large emitters, indigenous organizations, manufacturers, and numerous governments.

The Wood Pellet Association of Canada is a member-driven organization advancing the interests of Canadian wood pellet producers. Over 90 per cent of Canada’s wood pellet production is exported to Europe and Asia for decarbonization.

Jamie Stephen, PhD, is the managing director of TorchLight Bioresources. Gordon Murray, RPF, is the executive director of the Wood Pellet Association of Canada (WPAC).