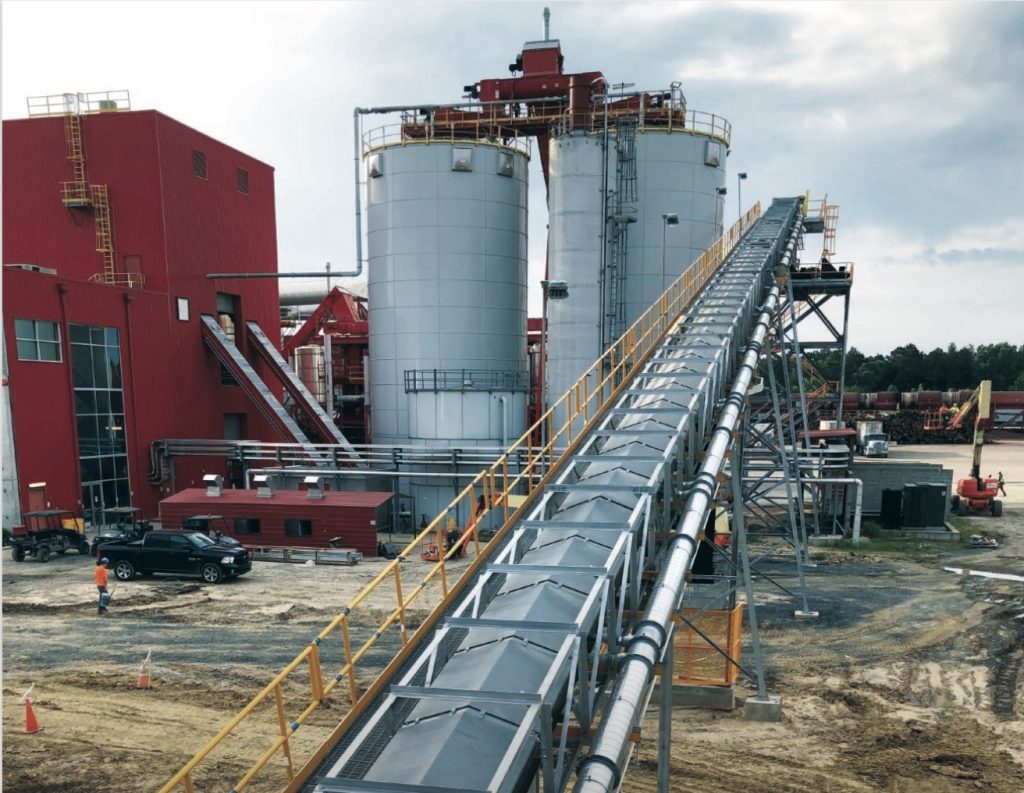 Climate change and a growing urgency to protect the environment also comes with the responsibility to reduce waste and make the best possible use of existing resources.

Environmental protection is built into Bruks Siwertell’s design philosophy and was seen as an effective option for Canada’s Barrette-Chapais, who was looking to implement extraordinary levels of efficiency and environmental protection at its new 210,000 metric tonne/year wood pellet production plant, Granule 777, in Quebec. Here, offcuts and residuals from its sawmills, which would have been regarded as a waste product as little as a decade ago, will be converted into usable biomass pellets which can offset the use of fossil fuels at power stations.

Integral to Granule 777’s operation is a new air-supported conveyor system with a rated capacity of 800 tonnes/hour for carrying wood pellets. It comprises a 100-metre-long Bruks The Belt Conveyor and a 250-metre-long Tubulator. The Belt Conveyor carries material from the facility’s two pellet storage domes before transferring it to the Tubulator system, which feeds it to the dock where the pellets are loaded onto bulk carriers bound for Europe. 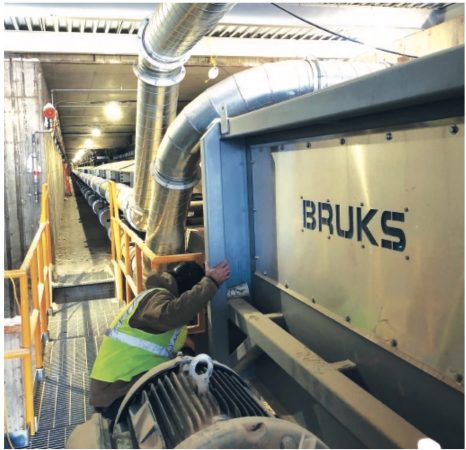 In selecting this system, and as an early adopter of The Belt Conveyor, Barrette-Chapais has elected to go steps ahead in its effort to maximize efficiency and value at the plant. “The Belt Conveyor stands significantly apart from any other ‘belt’ conveyor on the market,” explains Bruks Siwertell area sales manager, Christopher Duffy. “It is a new technology that mimics the geometry of a 35-degree idler conveyor, but combines the use of pressurized air with standard Bruks belt conveyors. This removes idlers from under the belt and delivers low-friction, high-capacity conveying with minimal equipment wear and very low operating costs.

“As for the Tubulator, it also uses air support to deliver low friction conveying and achieves capacities up to 40 per cent higher than comparable conventional idler belt conveyors. However, its configuration is different to the belt conveyor. Instead of a common header of pressurized air for each three-metre section, as in the case for the belt conveyor, the Tubulator uses a series of low-pressure fans at intervals of around 60 metres to create the air cushion.”

The Tubulator employs Bruks Siwertell’s innovative suspension cable tower technology, reducing foundation requirements and minimizing construction costs. “For this application we were able to span 250 metres down to the dock over very difficult terrain,” Duffy explains. “These long spans, up to 75 metres, are easily managed with the Tubulator and meant that we only needed to use three cable tower supports over the entire length. This is also a downhill conveyor so it is regenerative in nature, requiring a new braking system on the drive unit.

“Ultimately, Barrette-Chapais liked the advantages that low-friction conveying offered, and opted for a system that capitalized on the distinct advantages that both products could offer,” he adds. “This is an excellent example of how we are able to customize a solution based on operational needs with technology that is inherently designed to offer a competitive edge.” 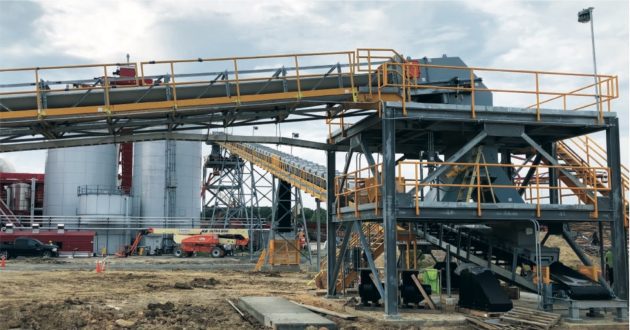 “Barrette-Chapais is a new customer, but we came highly recommended by other contractors and partners working at the site,” Duffy continues. “The company was looking for an economical installation that could accommodate these long spans over rough ground. Also, particularly because of the material it would handle, Barrette-Chapais wanted to reduce the risk of fire all the way from the infeed to the discharge point by minimizing moving parts.

“As neither of these air-supported systems use idlers along their conveyor lengths, the risk of friction fires from rollers jamming whilst in operation has been eliminated, along with the need for maintenance walkways and the huge associated costs of idler maintenance.

“Other advantages of the enclosed system include dust control, as they prevent stray sawdust emissions from impacting the environment, as well as keeping the product dry, which is important for integrity because water ingress spoils the pellets.

“The air-supported conveyors also ensure the quality of the material in terms of degradation. Ordinary conveyor belts use interstitial rollers to maintain their flat surface, but only up to a point; typically, with around 1.2 metres between them, the belt sags in the middle, causing a series of fractional bumps to the cargo as it travels along. The interference is minor, but over long distances, cargo – particularly when sensitive, such as with biomass pellets formed of compressed sawdust – can break down and degrade. The consistent quality of biomass fuel is essential for destination boilers, as degraded pellets do not burn evenly and reduce the efficiency of the combustion process.

“Transporting biomass pellets over long distances can be difficult without causing material degradation,” he continues. “Crushed pellets produce a fine powder that has to be removed from the cargo at the destination, is more easily picked up and spread around by the wind, creating pollution, and increases fire risk during various phases of transit.

“It is possible to overcome all these challenges,” Duffy notes. “With our air-supported conveyor systems, the belt glides over a cushion of air like an ice hockey puck, moving material smoothly along and preventing the bumps you would get from repeatedly going over idlers.”

All conveyor equipment was delivered to the Granule 777 plant at the end of 2019. Bruks Siwertell assembled the conveyors in 12-metre modular segments, and transported them by truck to Quebec’s Port of Saguenay for assembly, saving considerable time and installation costs. “The modular design of both the Tubulator and The Belt Conveyor are particularly well-suited to this con- struction method,” he says. “For the Tubulator conveyor, sets of 50-metre conveyor segments were assembled and hoisted into position by cable towers.”

Installation and dry commissioning of the system followed shortly after delivery and the plant became fully operational in spring 2020. “With the system now in place and on schedule, Barrette-Chapais is set to meet the huge and growing demand for biomass, which can be used to replace coal at the European power plants for which it is destined,” Duffy concludes.

The percentage of biomass generated as waste by industrial timber production will not be enough to completely offset the demand for coal at these types of facilities; however, there is still considerable potential for better utilization of this valuable residual product across the lumber and forestry supply chains. With help from Bruks Siwertell, Barrette-Chapais has been able to make the best possible use of existing resources; but with the help of companies like Barrette-Chapais, so will the world’s energy industries, as well.