Features Cleantech Education In-Depth
Scaling Up 2021: ‘a clear but challenging path’ ahead for Canada’s bioeconomy 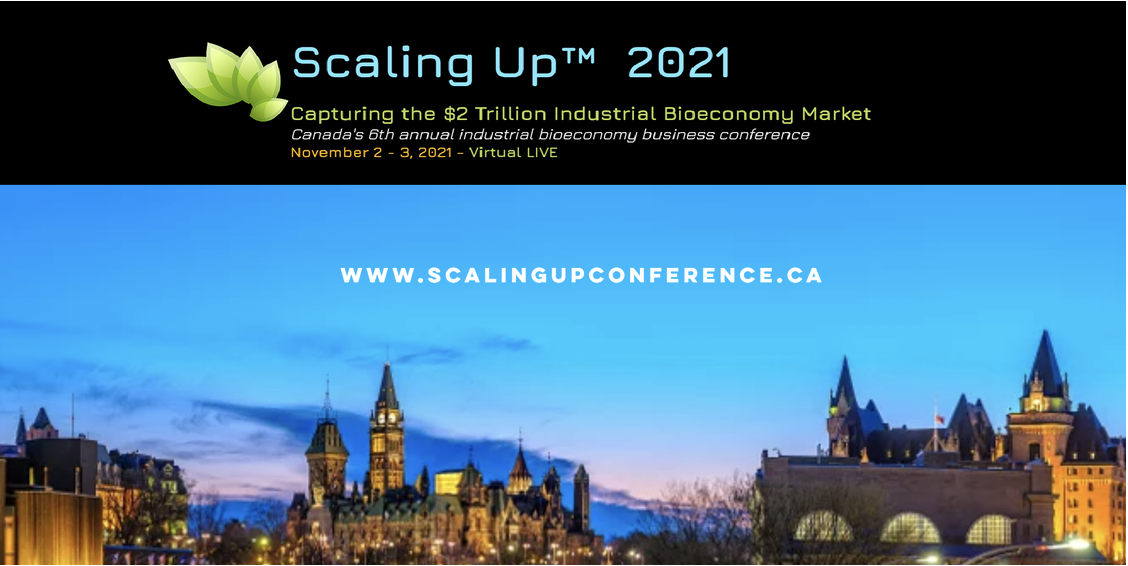 While global leaders met at COP26 to discuss new regulations and agreements, another event was happening at the same time: the annual Scaling Up Bioeconomy conference.

This year’s conference took place virtually from Nov. 2-3, 2021, and saw over 400 people attend from around the world. As host Jeff Passmore, founder and chair of Scaling Up, said, “It’s almost a mini UN COP conference here.”

Yet unlike COP26, Scaling Up had a much narrower focus. The theme this year was, “Delivering on Canada’s $2 trillion Industrial Bioeconomy Market,” a figure which comes from a 2020 report by the McKinsey Global Institute.

“In my view, there’s no reason why Canada cannot capture 10 per cent of that $2 trillion market,” Passmore said in his opening remarks, referring to the vast amount of wood products, agriculture and other biomass resources in the country.

However, as speakers at the event explained, for this to happen the bioeconomy needs both regulatory and business support. It’s also critical that the public better understand the bioeconomy and its potential impact on climate change.

Chris Henderson, president of Lumos Energy and founding executive director of Indigenous Clean Energy, kicked off the conference with a look at the catalysts required to accelerate the development of Canada’s bioeconomy.

According to Henderson, there are three catalysts: social relevance, market synergy and interconnected relationships. The first is particularly important in order to get public buy-in.

“We often hear about technology, rather than the social impacts and values,” Henderson said. “But, that has to be the business case you start with.”

“Today, Indigenous people own or co-own almost 20 per cent of Canada’s electricity-generating structure, virtually all renewable,” he shared. This is largely because they got local buy-in.

“I think the first thing anyone should be talking about in the bioeconomy, especially the industrial bioeconomy, is what it means for society,” Henderson continued.

“If you’re not socially relevant, you will not get the policy change and market dynamics you need.”

Market synergy is another catalyst the industry needs to focus on, with an emphasis on the industrial bioeconomy’s intersection with carbon pricing and commoditizing the value of the bioeconomy, Henderson explained.

Finally, industry needs to focus on elevating and expanding relationships.

“We can’t be fragmented – it’s keeping people from understanding what the market is about,” he said. “We need to focus on building relationships at elevation – not dealing with the technical side of things at the project level, but focusing on the relationships that build the market.” 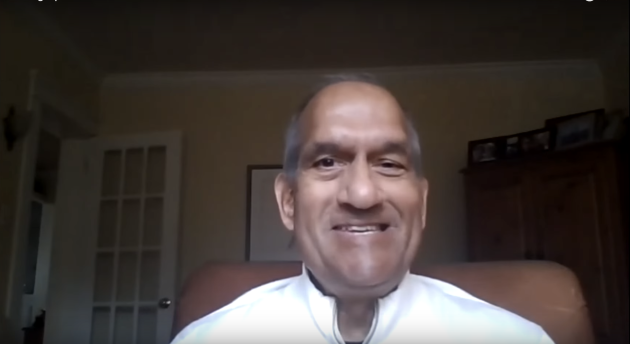 Those sentiments were echoed by the next speaker, Ralph Torrie, president of Torrie Smith & Associates and climate change advisor and director of research at Corporate Knights, who spoke on the future role of bioenergy.

There are opportunities throughout the energy system to reduce greenhouse gas (GHG) emissions, with electrification emerging as a central pillar of decarbonization. However, this means that while the bioenergy market is forecasted to grow, it’s typically only seen as the go-to-source when electrification is not possible, Torrie explained.

Technology advancements also mean that electrification is possible in more markets than previously believed. Consequently, “successful policies and business strategies for bioenergy are going to be those that explore these trends,” Torrie said.

“If you’re planning a business strategy or public policy for bioenergy, you need to be considering these complex and widespread dynamics,” he concluded. 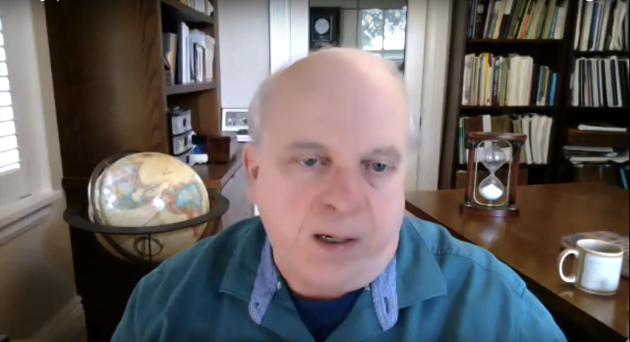 Ralph Torrie, president of Torrie Smith & Associates and climate change advisor and director of research at Corporate Knights. Screengrab from Scaling Up 2021.

The next speaker, Brian Foody, CEO of Iogen Corp., agreed that there will be significant investments in electrification in order to reach net-zero by 2050. But, biofuel also has a role to play in reaching net-zero, with low-carbon fuels projected to be three per cent of the total investment to reach net-zero in the U.S. – equal to about $70 billion, he said.

“This is only the beginning,” he continued. “By 2050, low-carbon fuels are going to need to power what can’t be electrified.”

It’s widely expected that aviation, shipping, long-haul trucking, etc., will be powered by biofuels, he said.

“So, when we look at net-zero, low-carbon fuels paired with carbon capture will need to provide the same CO2 reduction as electrification.”

That will result in a roughly $1 trillion fuel market with three major fuel types: drop-in fuels, renewable natural gas (RNG) and hydrogen. Bioenergy-based fuels will have a particularly important role to play because, when paired with carbon capture and storage (CCS), CO2 can actually be removed from the atmosphere, Foody added.

According to Foody, there are four requirements that companies looking to manufacture net-zero fuels need to meet:

Biomass-based fuels such as RNG, cellulosic ethanol, and gasification offer the best hope for this. However, only RNG has been proven to be practical and cost-effective thus far, Foody said.

“RNG owns the landscape for cellulosic biofuels in the U.S., with annual revenues of about $2 billion and 30 per cent year over year growth under the RFS [renewable fuel standard],” Foody explained.

Most RNG is produced in landfills, but there is a looming shortage of large, easily accessible landfill gas in the U.S., which will limit the market, Foody cautioned.

This can be overcome by using “stranded” biogas supplies and agricultural residues, he said. On the market side, the advent of renewable hydrogen as a transportation fuel will also allow for the substantial growth of RNG.

“The net result is that bioenergy has a clear but challenging path to delivering the carbon-negative fuels needed to reach net-zero,” Foody said. “Public policy will play a critical role to ensuring the investment capital is there to enable the production of net-zero fuels.”

In Canada, this means the deployment of the Clean Fuel Standard (CFS), he said. 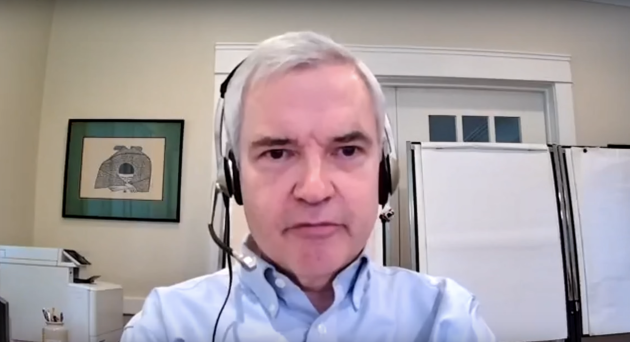 Brian Foody, CEO of Iogen Corp. Screengrab from Scaling Up 2021.

Speaking of the CFS, Ian Thomson, president of Advanced Biofuels Canada, gave an overview of the CFS and the changes needed to make the draft policy framework viable.

In its current format, the regulation is “unlikely to lead to significant uptake of fuels critical to our 2030 nationally defined contribution and our net-zero 2050 targets,” Thomson said.

Under the current draft design, the CFS requires fuel suppliers to reduce the carbon intensity (CI) of fuels they put on the market by 12 grams CO2e MJ between 2022 and 2030, he explained. The CFS has three compliance categories: CC1, which focuses on cleaner fossil fuels; CC2, which focuses on using low-carbon intensive (CI) fuels; and CC3 for selective end-use fueling.

The first draft of the CFS that has been released focuses on transportation fuels. But, there are a number of problems with it.

For example, as a holdover from previous designs, up to 10 per cent of a fuel supplier’s annual obligations can be met by reducing the CI of solid and gaseous fuels that don’t need to be associated with transportation – a flexibility not found in other clean fuel standards, Thomson explained.

Additionally, crude oil, gas and diesel, when exported, could be used as credits for compliance – “an absolute no-no in all other clean fuel regulations,” he shared. This will contribute to fossil fuel lock-in, whereby policies, or in some cases, the lack of them, make Canada more reliant on fossil fuels. Actions taken to meet provincial regulations will also count towards CFS compliance.

These and other “flexibilities” mean that the CFS currently operates more like a cleaner fossil fuel standard, and will be misaligned with the clean fuel standards in California, B.C., Oregon and the EU, he said. They also “raise the risk of potential investors looking to add substantial new capacity in non-fossil fuel production in Canada.”

In order to address these issues, Advanced Biofuels Canada has proposed a solution: to implement a “net-zero guardrail,” which calls for compliance credit utilization to mirror the lifecycle of fuels, Thomson explained.

Under this solution, CC1 compliance, including the flexibilities mentioned above, would remain, but would be capped at 24 per cent. If an obligated party fails to meet that guardrail, CC2 and CC3 would be required. 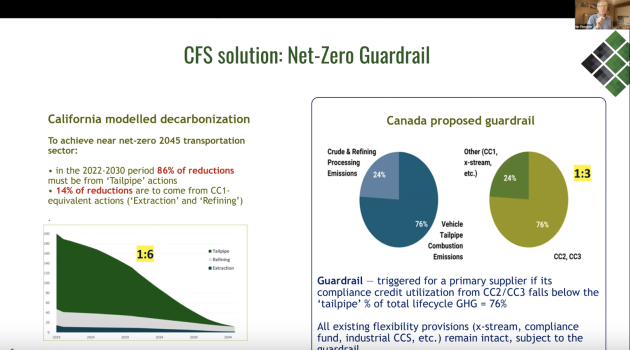 Much of the conference also focused on how to attract investment for new bio-based products and manufacturing plants, accelerate the bioeconomy and de-risk investment.

“This is an interconnected economic development network to get plants built faster, regardless of whether they make biofuels, biogas, clean power, etc.,” Solomon explained. “It drives those plants to distressed communities around the country where the jobs have an impact on the community, like places where we’ve lost pulp and paper plants.

“So, by 2030, we can help create 16,000 new clean energy jobs, inject $1.4 billion in communities and reduce net GHG emissions by two per cent,” he continued. “It’s a move-the-needle type initiative – two per cent is the equivalent of removing 18 per cent of all cars off Canadian roads. It’s a big leap to help catalyze bioenergy development and improve infrastructure in our country.”

According to Solomon, of the three risks associated with building new bio-based manufacturing plants – market risk, technology risk and feedstock risk – feedstock risk is the only non-hedgeable risk over the long-term.

“It’s a fact that feedstock risk is, in terms of bio-project finance, a massive barrier,” he said. “So, if we want to catalyze the bio-based economy, we need to solve for feedstock risk.”

Consequently, people spend a lot of time finding the optimal place to build plants near credible feedstock sources. But, the BDO Zone Initiative removes the need to find an optimal place by providing a credit-type rating for specific areas. This allows investors and developers to locate the lowest-risk areas from a feedstock point-of-view and develop new plants there.

As part of this initiative, municipalities looking for investors to develop bio-based plants will nominate zones to be rated for feedstock risk.

Ratings provide something these municipalities previously lacked – “the means to stand out from the crowd and leverage their biomass feedstocks,” Solomon explained. 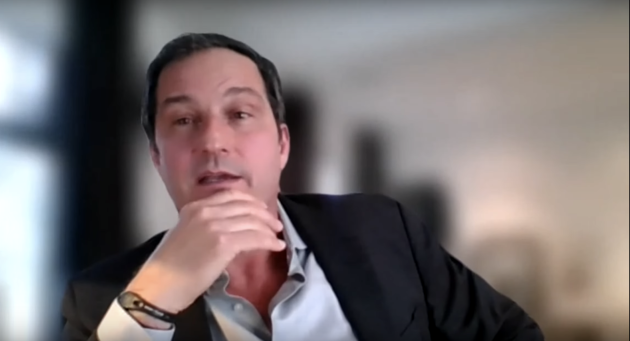 Jordan Solomon, president and CEO of Ecostrat. Screengrab from Scaling Up 2021.

So far, four BDO Zones have been created, including one in Melville, Sask., which is A-rated for wheat straw. The City of Melville has already seen the benefits of this initiative – within five months of receiving their A-rating, they saw a 750 per cent increase in calls from bio-based developers, Solomon shared.

The BDO Zone Initiative also helps project developers distinguish areas based on feedstock risk. Developers in these areas will also have access to $1 billion in capital from the BDO Zone Investment Coalition.

On top of this, at the end of October, Ecostrat announced the BDO ZoneCONNECT platform, in partnership with The Digest, which will show project developers, feedstock providers and partners the latest BDO Zones.

“We expect this will drive enormous deal flow and make the phones ring,” Solomon said.

The Scaling Up conference will return to Ottawa for an in-person event from Nov. 14-16, with the theme, “Pressing Forward: Replacing Hydrocarbons with Carbohydrates and Beyond.”