As another year comes to a close, there is a lot to reflect upon. The world as a whole has seen multiple ups and downs as the COVID-19 pandemic continues to impact everyone’s lives and a new variant brings more uncertainty. But, for the Canadian bioeconomy, 2021 has seen progress, with more policymakers and governments turning their attention to fighting climate change. Our industry is well-positioned to take advantage of this, although work still needs to be done to commercialize new technologies and bioproducts, as we heard at this year’s Scaling Up virtual conference.

The wood pellet industry in particular is seeing demand growing from different countries, with pellet exports expected to increase in Japan, the U.K. and Europe in the coming years. Drax Group’s acquisition of Pinnacle Renewable Energy in April this year is a sign of just how strong the business case is for using wood pellets as a clean, renewable alternative to fossil fuels. 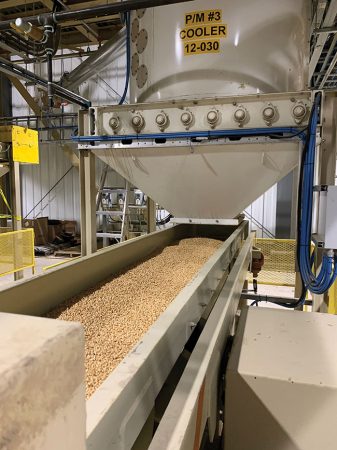 A lot of work has also been done to emphasize the sustainability of the wood pellet industry and combat environmental groups’ arguments against wood pellets. The Wood Pellet Association of Canada (WPAC), in association with Canadian Biomass, presented multiple virtual events this year, all of which emphasized how wood pellets can help address climate change. The WPAC Asian Wood Pellet Conference in February, for example, saw speakers discuss topics including biomass and GHG requirements in Japan, the importance of trade partnerships in tackling climate change, and the results of a Canada-Japan study on wood pellets’ carbon footprint. The 2021 WPAC conference and AGM also emphasized the sustainability of wood pellets, with speakers discussing how wood pellets can help Canada reach net-zero and the power of pellets in the emerging bioeconomy.

Speaking of reaching net-zero, 2021 saw a lot of investments in the biofuels space. For example, in March, the federal government announced a $530,000 investment to support a project in Banff, Alta., converting municipal waste into biomass energy. And in April, the federal government announced a $2.89-million grant for a project that converts renewable materials into fuel for jet engines. On the hydrogen fuel front, the government of B.C. amended its Greenhouse Gas Reduction Regulation to increase the production and use of green and waste hydrogen, and multiple companies announced partnerships to begin producing hydrogen.

A lot of research and investment has also gone into the development of new bioproducts as an alternative to single-use plastics, as part of a global effort to develop a low-carbon economy. At the beginning of the year, the federal government invested $1 million in NEXE Innovations to begin the second phase of their project scaling-up production of a compostable coffee pod made from bioplastic wood fibre. And, in the summer, FPInnovations provided an update on their project incorporating bioproducts in concrete in an effort to make concrete more sustainable.

All of these projects and investments are helping to raise awareness about the sustainability and environmental benefits of bioproducts, biofuels and bioenergy.

Here is our annual list of the top 10 most-read feature stories in 2021:

10) Sustainable bioproducts in concrete? FPInnovations is making it happen, and fast!

9) Opinion: On the path to net zero, Canada must grow a circular bioeconomy

In this opinion article, published on World Bioproducts Day, Sandy Ferguson and Rob van Adrichem discuss the importance of importance of bioproducts and how they contribute to environmental sustainability, community resiliency, and climate action. They also explain the role governments can play in advancing the circular bioeconomy. READ MORE.

As part of this year’s Dust Safety Week, Michele Fry, director of communications for the BC Forest Safety Council, wrote an article about best practices when it comes to fibre pile management. Fibre piles are at risk of self-heating over time due to the microbial decay of the wood fibre, triggering combustion within the piles, she explained. Understanding how to manage these piles is critical for all wood fibre manufacturing operations. READ MORE.

7) From pellets to power: Inside North America’s first power plant to be converted from coal to biomass

When the Ontario government passed legislation almost 20 years ago to discontinue the use of coal as a generator of electricity, one of Ontario Power Generation’s plants was given a new lease on life. Instead of being decommissioned with the other coal-fired plants, in 2014, the Atikokan, Ont., generating station became North America’s first plant to be converted from coal to biomass. Canadian Biomass gives readers an inside look at the plant. READ MORE.

A first-of-its-kind study in Canada confirmed that pellets produce 91 per cent less greenhouse gas emissions (GHG) than coal. The study collected data from WPAC’s member wood pellet producers, including supply chain calculations, and used third-party audited GHG reports for each of the 17 plants studied. The results showed that wood pellets fired in Japan produced only 8.37 per cent of the GHG emissions produced by coal. READ MORE.

5) Residential use of wood pellets: a missed opportunity in Canada

Canada is the second largest producer of wood pellets in the world. Which begs the question, why aren’t we doing the same in Canada instead of exporting almost all of our annual production of three million tonnes of wood pellets to Europe and Asia? The answer, according to Gordon Murray and Harry (Dutch) Dresser, lies in large part to barriers that restrict the sale of pellet-fuelled boiler systems into the Canadian market. READ MORE.

4) Trees must go to their highest and best use, our business depends on it

In June 2021, B.C.’s global reputation as a leading supplier of responsible, renewable energy came under fire as British Columbians grappled with the benefits of local jobs and opportunities from a proposed wood pellet plant versus the large-scale harvesting of aspen logs from significant swaths of forests as raw material for these pellets. WPAC’s Gord Murray addresses the issue and highlights the importance of using trees for their highest and best use. READ MORE.

With growing demand for low-carbon, sustainable fuels, the wood pellet industry was in a good position at the start of 2021. FutureMetrics’ president William Strauss shared his outlook for the wood pellet market in the beginning of the year. While the heating pellet market was expected to continue its steady growth, the outlook for industrial wood pellet growth depended on policy scenarios: current policy with no changes or evolving policy in response to the increasing negative consequences of climate change. READ MORE.

As more emphasis is placed on fostering a green economy, large businesses are investing in new ways to power their operations with renewable sources. GM Canada is one such business. In August 2020, the company announced it had completed a $28-million cogeneration project that uses renewable landfill gas (LFG) from a local landfill to power and heat its St. Catharines, Ont., Propulsion Plant. Canadian Biomass gives readers an inside look. READ MORE.

When most people hear the words “flax straw,” they don’t think about biofuel. But a new start-up based in Regina called Prairie Clean Energy wants to change that. The company, which was founded in March 2020, has developed a process for turning flax straw, which is often burned or trashed, into biofuel. READ MORE.